Event ID: 7000 The SQL Server...service failed to start due to the following error: Access is denied.

Yesterday I worked through a new install of SQLServer 2012 with SP1 on Microsoft Windows Server 2012 Standard on a VMware virtual machine.  During the install everything went smoothly, however once complete I noticed the services were stopped and there were errors in the OS system log: 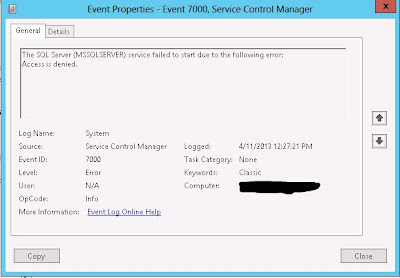 I turned to my best friend, in situations like this: www.google.com.  Unfortunately this didn't get me very far; it took a bit more digging.  I gathered more errors from the Application log, the System log, and the bootstrap summary (%programfiles%\Microsoft SQL Server\110\Setup Bootstrap\Log\Summary.txt):
I also notice that if I attempted to change the "log on as" user in SQL server Configuration Manager again I received an "access is denied" error.  This occurred even if I attempted to use a system user.

It was googling more detailed error messages from the bootstrap summary log that lead me to the solution.

Apparently, when you build Windows Server 2012 on VMware we need to disable the HotAdd/HotPlug capability.  Who knew?

This was a difficult one to track down, but thanks to SQL Server Central forums, MSDN forums and the community I now have a new item on my build checklist.

One of the things that really helped quickly get through multiple install attempts was using an install config file.  This allowed me to run through the install over and over without having to click through the install each time.  There's a really good article on how to setup an unattended install here: SQL Server 2008 R2 – Unattended Silent Install (Works the same in 2012).

Posted by Jon Morisi at 4/12/2013 08:03:00 AM
Email ThisBlogThis!Share to TwitterShare to FacebookShare to Pinterest